A classic landscape to look for around lakes and large inland bodies of water is a mirror-like reflection. The conditions have to be just right: the water needs to be still – any movement in the surface will disturb the mirror image. For this reason, dawn is the best time to seek out this type of scene – not only is the light usually better early in the morning, but the water will be at its most still, and there’s even the chance of atmospheric mist surrounding the lake. Naturally the reflection will be darker than the sky, but if you're aiming for symmetry try to balance the sky with the reflection – this can be done with an ND grad filter, or you can correct it in processing.

2. Tricks of the trade

There are a couple of tricks that can help add to or elevate an image to make it more interesting. If you’ve rocks or boulders in the foreground, for example, when shooting a stream or along the coast, you might find that some of the rocks remain dry despite the water around them. Dry rocks can look brighter than their surroundings, and generally less interesting, so don’t be afraid to splash some water on them to make them fit in with the scene a bit better – if you can’t get out to the rock or boulder in the stream, then throw stones near them to splash them. Another trick is, when photographing woodland streams in autumn, add some leaves to the flow of the water before capturing them as they float past the camera – it’s a quick and simple way to add interest and highlight the water’s path through the image. 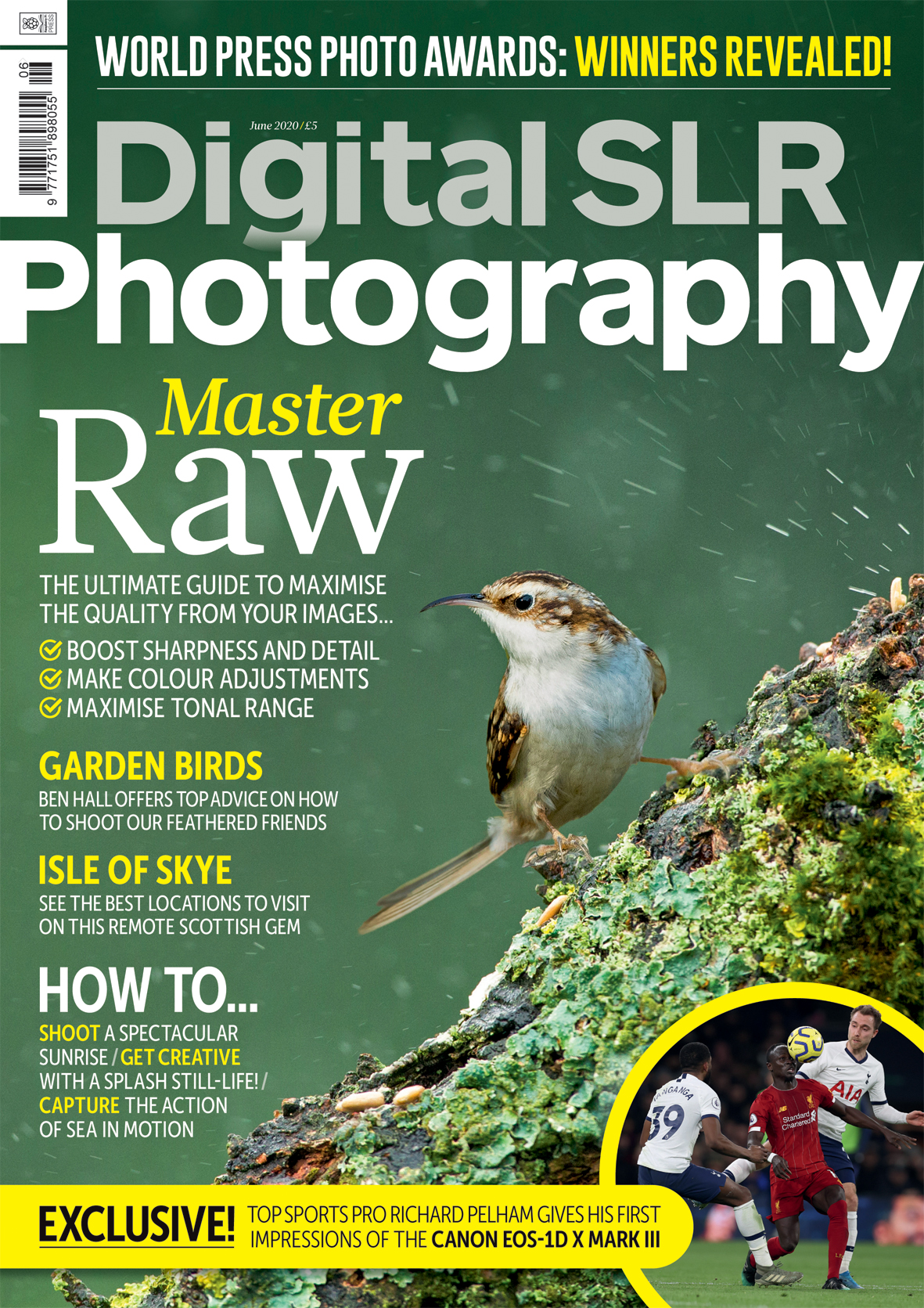 WELCOME TO THE JUNE 2020 ISSUE of Digital SLR Photography. In this month’s Photo Masterclass to using Raw, we show you how accessible the file format is and how easy it can be to upgrade your photo…

A common mistake photographers make when shooting water is to immediately reach for their six- or ten-stop ND filters, aiming to create the longest exposure they can so that moving water becomes a milky, misty blur. It’s easy to see the appeal as it’s very different to how we perceive water with our eyes, and does separate the images from an everyday snapshot, however in doing so you can also lose interest in the water. More often than not, more pleasing results can be had by finding an exposure time that retains detail and texture in the flow of the water, yet still records the water’s movement. The exact exposure time depends on light levels and the speed of the flow, so some trial and error will be required, however generally an exposure of around one to two seconds will create pleasing results in many situations.

When seeking foreground interest in your landscapes, look beyond the obvious and consider that the flow of water itself can create a compelling foreground when captured with a longer exposure. Water flowing through a series of rocks can be used to create lead-in lines, guiding your viewer into the scene, while swirls and whirlpools look fantastic when recorded over a matter of seconds. These components can be tricky to spot with the naked eye, and often only reveal themselves during a long exposure, so when shooting near water take a moment to watch how it flows and look for patterns in the water’s flow through the foreground that can be used in your composition. Of course there needs to be something in the surface of the water to highlight its flow, such as bubbles, foam or debris such as leaves, and these elements can often be found where water is disturbed as it moves, such as when waves crash on the coast, or near waterfalls or babbling brooks.

Woodland is a haven for photographers on overcast days. Although light levels will be lower, the light will be flat and the scene will be evenly exposed without awkward or unsightly highlights and shadows to contest with. That’s not to say early morning visits on bright days should be discounted – shooting towards the light can add fantastic atmosphere to a woodland stream, but make sure the sun isn’t striking the water directly or it’ll burn out. Woodland streams can look great in autumn, once the leaves are amber and scattered around the rocks, however my favourite time to shoot streams under canopy is during the spring, when the foliage is lush and green. Look for a stream with a nice natural curve to
it, so that it winds through the frame. It doesn’t matter if you shoot up or downstream; go with whatever suits the image best. However, pay close attention to the surroundings – you should look for a background with good, even foliage cover that fills the frame. If you have any areas of bright sky creeping into the image you lose some of the magic and colour. For this reason, I often shoot woodland streams with a mid-range zoom, such as a 24-70mm, to avoid including any sky in the composition.

Snow and ice still technically counts under the category of water, right? Shooting in snowy conditions presents its own unique set of challenges. Metering systems in digital cameras are pretty fool-proof, however snowy scenes in bright light can still trick metering into under-exposing the image, rendering snow as a dull grey rather than brilliant white. If this happens, use exposure compensation to add positive exposure and try again. One benefit of shooting in wintery weather, however, is that it’s often overcast, and dark heavy snow clouds add drama to any kind of landscape – you’ll probably find that you can shoot free of filters in such circumstances, as the exposure between sky and land is already nicely balanced. Don’t discount visiting woodland during or after a snowfall either – snow coating skeletal trees can transform a dead or dull scene into a winter wonderland.

It’s hard to dispute the appeal of waterfalls – they’re dramatic, exciting and, as they’re often breathtaking in person, they inevitably make interesting images. A common mistake of photographers is to gravitate towards the biggest, widest and tallest waterfalls with the heaviest flow assuming that they’ll make for the best images. However, these are the most difficult kinds of waterfalls to photograph with success – big, crashing falls with lots of white water tend to be chaotic and messy. I prefer to shoot smaller, more elegant falls with less flow – thinner, wispy trails of white water cascading down rocks are more aesthetically pleasing than the big blobs of white water you see at larger falls. For that reason, timing your visit to coincide with heavy rainfall often isn’t the best approach, while at the same time, photographers visiting after a period of especially dry weather will be equally unfruitful. One tip for shooting waterfalls where there’s a lot of spray in the air is to carry a hotel shower cap with you to protect your front element and filters when not shooting – not only are they free, but they’re also transparent, so you can compose your image, get your exposure right and be ready to shoot before whipping the cap off to capture the shot before quickly replacing it. Should you end up with spray on the lens, keeping lens cloths to hand is a good idea – fresh water, unlike seawater, can simply be wiped off.